Finding balance between grit and feminity

“I believe in deeds, not words.”

I was twelve when I first stumbled upon Tamora Pierce’s writing. I’d initially picked up the book because, at the time, I was big into horses, I saw one on the cover and thought it seemed right up my alley. What started out as a light read, driven by my

desire to ride horses, turned into something that would shape me for the rest of my life.

Alanna’s story is one of adventure and love, but also one of power: she trades places with her twin brother in order to be sent to the palace instead of a convent, so she can train to be the first female knight in her country in hundreds of years. She wants to fight, to be independent, and not to have to rely on anyone for anything. I didn’t realize it at the time, but it had a dramatic impact on my life.

As an adult, I’ve realized that one of my biggest pet peeves is not doing the things you say you’re going to do. While this might not be a big deal for some, it’s something that I strive to accomplish: if I tell you I’m going to do something, I will do it. I want my word to mean something, and when Alanna said she was going to do something, she did it. She told herself that she would become the first female knight, and she worked harder than everyone around her in order to make it happen. This is something that I saw (and still see) as an admirable quality.

“Moral issues rarely have yes or no answers.”

— Myles of Olau to Alanna

This is something that I think about more often than not. Myles, in the above quote (a teacher of history at the palace), is talking to Alanna about the Gift, which is what they call magic in the book. Alanna is afraid of her Gift, and wonders what the moral implications of using it are. She doesn’t want to get ahead by doing what feels like cheating to her, even though it’s a part of who she is.

Alanna is one of the few people that understands that with power comes responsibility, and she doesn’t want anyone to question her integrity. As an adult, I’ve realized that this is a really powerful thought, and one that’s shaped me. How can we avoid using our unique talents to our advantage, but not to take advantage of others? There are many characters that surround her that show the audience that power can be corrupted, but if you maintain your own ideals, you can maintain your integrity. 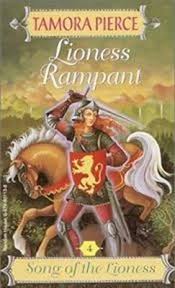 Alanna was the first female character that I had come across that maintained her sense of self in the face of many things. She was particularly adamant in the first couple of books that she didn’t need a man or romantic entanglement to get in the way of her goals. She was perfectly happy to be on her own and to do the things that she wanted to do. She showed me that you didn’t need to be involved with someone to accomplish your goals. However, she also showed me that the right partner supports you in your goals and doesn’t try to change them to suit their wants or needs.

“Why do boys say someone acts like a girl as if it were an insult?”

—Tamora Pierce, In the Hand of the Goddess

The Song of the Lioness quartet changed the way that I viewed myself, not only as a person, but more specifically as a woman: I was shown that I could have goals and aspirations that seemed crazy to other people and that if I worked hard enough, I could achieve those goals. It was the first time in my life that I was really able to see that a woman could be multi-dimensional, both loving and strong, stern and playful. The series helped me to embrace the dualities in my own nature, and to stop seeing some as flaws. I am who I am, and I should be able to show all of the aspects of myself. Alanna showed me how to love fiercely, fight for what I believe in and that I don’t have to conform to anyone else’s idea of who I am.

“You turned into a hero when I wasn’t watching.”

Tamora Pierce created this incredible world full of adventure and power, and at it’s center is a female character that I could identify with. It’s as if Ms. Pierce knew what I was craving in my life and wrote the series just for me. Through Alanna, I was able to model my own behavior to reflect hers, and I think that it’s made me a stronger adult. While I don’t always have time to re-read the series, it’s something that I’ve thought about almost daily for the last fifteen years of my life: What Would Alanna Do? So far it hasn’t lead me astray.

One thought on “Lioness Rampant, and How Tamora Pierce Became One of My Feminist Icons”